As part of my amazing invitation to the #CaptainAmericaEvent in Los Angeles last week, we were able to get to meet first hand the cast and producers of great new ABC programs like The Family that we told you about  already, and The Real O’Neals. Getting to Know The Real O’Neal Family on ABC #TheRealOneals #ABCTVEvent We viewed a couple of episodes with Matt Shively and then we sat to interview executive producers Casey Johnson, David Windsor and Stacy Traub plus the funny and welcoming cast of the show.

About The Real O’Neals

A fresh take on a seemingly perfect family whose lives take an unexpected turn when surprising truths are revealed. Instead of ruining their family, the honesty triggers a new, messier chapter where everyone stops pretending to be perfect and actually starts being real. Starring: Martha Plimpton | Jay R. Ferguson | Noah Galvin | Matthew Shively | Bebe Wood | Mary Hollis Inboden

Let’s start by the creators and producers of the show Casey Johnson, David Windsor and Stacy Traub. After they introduced themselves we had a two moms and a father or two sharing their experience to be parents to a new show.

Question: Is the show based on somebody you know?

CJ   :    “Originally the spark of the idea was based on Dan Savage’s life. He grew up in Chicago in an Irish Catholic family and was gay and so we took that idea and expanded it into this show.  Then we kind of started folding in all of our experiences, because we wanted to be as authentic as we could, so we were very careful at putting together that staff.  So I mean there are many things- Stacy was divorced, David grew up with two gay dads, so this issue has always been really important to us.”

Question: Have you felt any negative backlash from the show?

ST   :   “We feel like most the negative has been from people who haven’t really watched the show but just know what it’s about or have gone in wanting to hate it.  But, you know, if you, if you believe tweets, which I do and I’ve been watching the live tweeting every week, the response has been positive and lovely.”

Question: Do you think that because it is a catholic family some in the audience can feel left out?

CJ   :   “Well  I’m Jewish and I relate.  A controlling mother is a controlling mother, it doesn’t matter what religion you are.  So what I think is interesting about them being Catholic is that what is happening to all of them makes it more difficult.  My daughter who’s eleven loves the show, she’s not a boy, maybe she’s gay, I don’t know.  But, I think kids can also watch this show and see themselves in this character because he’s a kid who’s trying to figure himself out, figure out who he is in the world.  So I, I think the specificity actually makes it universal. It gives it- it’s what gives it the comedy but I think everyone- any big family or anyone with that kind of mom can see, can see themselves.  So no it’s not polarizing. ”

They shared from the cast that their chemistry is amazing.  So much so that  they all feel and act like a family and that makes it so amazing to be able to translate their work on to the show.

So let’s see what the cast had to say.  First on, Noah Galvin and Jay R Ferguson

Question : When you’re not shooting, are there a lot of private jokes?

JRF : “Yeah I think that’s an understatement. Why, does it show, can you tell, we have a good time together.”

NG : “The chemistry reads, we do, we have a, we have a good time together. Jay is a big proponent of games.  When we’re doing these fourteen hours days and it’s a comedy, you’ve got to keep it alive, keep it funny.”

JRF : “Yeah we to try to have as many extra curricular activities as we can while we’re working and then while we’re not working we hang out socially as well.”

Question : Of all the episodes so far, which one is your favorite?

NG : “I don’t know, I like aspects of all of them. I have a little favorite moment in each of the episodes.  The grandma episode is one of my favorites I think.”

JRF : “That was a good episode. I think my favorite is the Real F Word, the one where Kenny outs himself at school.  That’s been my favorite, just because these guys kill it so great in that episode.”

Question : I love how you handle things going on in society today, any other topics you’ll be addressing?

NG : “Maybe like our, our prom episode, like bringing a same sex date to prom is something that Kenny will go through in our finale.”

JRF : “One of the other things that I love about our show so much is that, yes of course, there’s a topical element that is, somewhat different. But, but really at its core,  it’s a family that is going through the same things that all families go through.”

Noah and Jay also shared that they live tweet during the show.  It is easier for one than for the other, we won’t mention names, but it is a great opportunity for all us of to react right then and there to what we are watching with the cast!

Last but not least  we posed questions to Matt Shively and Mary Hollis Inboden  As this pair sat with us they started talking back and forth about how well they all get along, and can’t get enough of each other.  They spend plenty of time together on and off set just hanging and keeping connected even when they are back at their homes all over the country.  They couldn’t hide either how much they love their show and woking on it.

Question : Do you have any favorite episodes?

MS : “I do too and I think that’s like her best episode too. I, I had forgotten how many amazing one liners she has in that episode, it’s so good/”

Question : I would like to know if you had a background in comedy?

at this point Matt interrupted to ask :”to that is where you get it from”  We all erupted in laughter.

MHI continues:” and dabbled in Second City- so yes I came straight to the part of Aunt Jodi after studying at The Annoyance, which is an improv school in Chicago, and my best friend in the whole world is a standup comedian. I have oftentimes like watched her work and written jokes for her, though I would never do standup myself it scares me to death.”

A New The Real O’Neals Episode

I am looking forward to tonight’s episode called  “The Real Book Club”, in which Eileen faces her book club for the first time after her family’s “outing,” but things take a surprising turn when instead of shunning her the ladies begin opening up – way too much – about their own problems. Kenny’s first trip to the “gayborhood” coffee shop is everything he’d hoped for, until Pat tags along with him to a gay dodge ball match.

Honestly, I hadn’t watched The Real O’Neals before the trip, and I was pleasantly surprised with it.  It is funny and light while it touches upon topics that most families will encounter at some point like grandma’s visit or kids competing against each other.  At the same time, the show does touch upon other subjects as divorce and embracing a gay sibling/child.  Watch this program live every Tuesday on ABC at 8:30pm.  Don’t forget to watch it within 3 days if you DVR it so your favorite program gets rated! 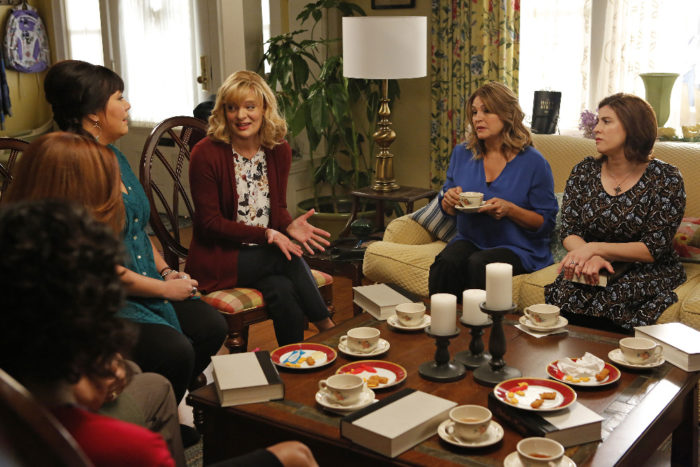 THE REAL O’NEALS – “The Real Book Club” – Eileen faces her book club for the first time after her family’s “outing,” but things take a surprising turn when instead of shunning her the ladies begin opening up – way too much – about their own problems. Kenny’s first trip to the “gayborhood” coffee shop is everything he’d hoped for, until Pat tags along with him to a gay dodge ball match, on “The Real O’Neals,” TUESDAY, APRIL 19 (8:30-9:00 p.m. EDT), on the ABC Television Network. (ABC/Vivian Zink)
MARY HOLLIS INBODEN, MARTHA PLIMPTON, ANITA BARONE, MELANIE PAXSON

The Caring Foundation of Texas to offer free vaccinations to students in DFW, Houston regions