In time for Halloween we get to celebrate a beloved classic Hocus Pocus!  We do it with Hocus Pocus 2.  Earlier this week I attended the press junket for the film and we talked about costumes, fun facts, and reprising all things Hocus Pocus 29 years later and much more.  Here are the details that captivated me most from the Hocus Pocus 2 Press Junket

I couldn’t wait to get all the details of about the Sanderson sisters getting back into what they do best!  Here is the talent at the Hocus Pocus 2 Press conference:

Here is a melange of Hocus Pocus 2 Fun Facts that every one in the room was eager to learn about:

Yes, the costumes area bit different from the original film. Director Anne Fletcher explained that after 30 years the original Sanderson sisters dresses were not in the best shape.  So, it was the opportunity to create something new.  These new dresses try to stay close to the original design, and now include some Wicca symbols. “The symbols on all three of the witches outfits especially Bette’s mean something. It’s sort of now modern day Wicca but in the 1600s that version of witchcraft which was a tethered to the earth, the ocean, the stars, it’s all tied together and it’s all on her cloak as well as the bird. It’s all reflected in Winifred’s cloak and in Mary’s rings. The three girls also have the symbols, as well as each witch’s color stone in their matching necklaces.“ said Anne Fletcher.

That is not all. Producer Lynn Harris told us that to go with the necklaces, each of the sister’s costumes mirrors the color scheme of their Sanderson sister.  Another fun facts is that Izzy’s burgundy cardigan is a nod to Allison’s iconic red jacket we see in the first film And, Mother Witch’s cloak, takes on similar colors to Dani’s witch outfit in the original Hocus Pocus.

It might be hard to top ” I put a spell on you”.  So, the focus of the music is to underline and bring the story out.  That said, we will enjoy The Witches Are Back, written by Elton John and Bernard J.P. Taupin, and Skeleton Sam by LVCRFT in Hocus Pocus 2.

This one is an Easter Egg of sorts.  Hocus Pocus 2 does a call for a bow to the original film’s director Kenny Ortega.  It is done by way naming the apple bobbing booth “Rotten to the Core” which is the first song in the Descendants.  The tie in?  Well, Kenny Ortega directs The Descendants!

Remember the sisters using vacuum cleaners and brooms when their magical brooms were stolen by trick or treaters?  In the sequel, the scene takes life again with swiffers and roombas!

The story telling is made to feature some positive attitudes, especially for women.  Bette Midler shared:”“I think these three characters are really in a strange and odd way, quite positive for women. First of all, they’re very funny, which women are not allowed to be are not supposed to be. And they’re intensely loyal to each other, even though their relationships are… it’s a very broad range of emotions that they live through.” 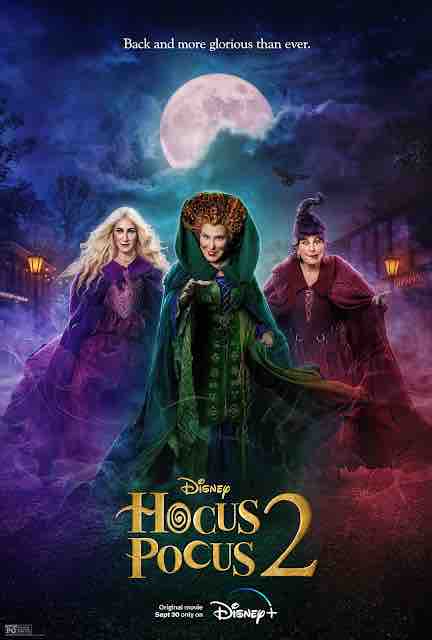 There you have it!

Watch Hocus Pocus 2 now on Disney +.  And if you want to have a little extra to celebrate these cool witches get the adults in the group to try this specialwitch mocktail/ cocktail.

Everyone will love indulging in the frightfully delightful witches brew snack.

New Yorker Of The Year: Dr. Alejandro Badia, Wearing Many Hats In Orthopedics